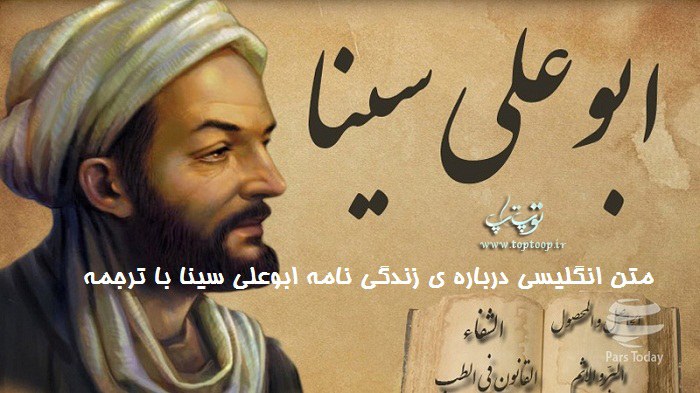 Abu Ali Hussein bin Abdullah bin Sinai was born to Abu Ali Sina in a village near Bukhara, 359 AH.
His father Abdullah and his mother was a star. His father's birthplace, Balkh, and his mother were from the village of Afshaneh. Abu Ali Sina, at the age of 5, taught his mathematician just by his father, who was a teacher of medicine. Along with the lessons of mathematics and instruction, he also taught the Qur'anic verses and the syntax of Arabic language. Avicenna was very intelligent and showed great passion and passion. He kept the Qur'an at age 10, and he had also fully learned the literature, geometry, mathematics, and Arabic syntax. It has a special interest in animals and nature. For this reason, since childhood, he sought the properties of herbs and medicine.

When Abu Ali Sina was 12, her father was in the office of the court. Abdullah sent his son to a professor named Abdullah Natalie to study his master's degree. Before that, Abu Ali had learned jurisprudence with Master Ismail Zahed.

Abu Ali Sina was smart enough to discover some new material in science. Professor Abdullah Natali encouraged Abu Ali to study science and knowledge. In this way, Abu Ali Sina learned the science of logic and then went to graduate studies in mathematics.

Abu Ali Sina needs hard work to complete her information. He read theology and natural sciences and promoted his knowledge. He benefited from every book he earned. By studying his great books and his scientific experiments, he was able to learn medical science. Every book is being analyzed and it has a lot of information about metaphysical wisdom. Abu Ali Sina studied the metaphysics of Aristotle more than 20 times, but did not understand the meaning of the sentences correctly. Until one day he went to the Bukhara market, a seller sold him a worn book. When he read that book, he received a book written by Abu Nasr Farabi. By reading this book, all the explanations of Aristotle in our book became clear to him.

In 375, when Abu Ali Sina was only 18 years old, the ruler of Bukhara (Noah II) became ill. The servants of Amir came to Abu Ali to take him for treatment. Abu Ali Sina asked Ibn Khalid, the specialist doctor, to show Amir's symptoms. It was found that the ruler had long been suffering from nausea and burning in the stomach and had a part in his body. Abu Ali, in terms of his symptoms, was diagnosed with lead-induced poisoning and started treatment. He appealed to the ruling ruler to use the royal library because only princes and elders had the right to use this royal library - and Noah Ibn Mansur accepted this request.

Abu Ali Sina succeeded in achieving the royal library of Bukhara. His golden age spent his evolution in the library for three years. A new chapter in science and knowledge in using the royal library began for him. The Royal Library of Bukhara was at that time the most comprehensive library. Because most of the rare and rare books were available. He succeeded in completing his education in literature and music and added to his jurisprudential jurisprudence. He also studied studies of astronomy and astronomers' plans. Abu Ali Sina began writing at the age of 20 and wrote a collection of 10 volumes titled "Product and Crop". He then wrote a book on ethics called "Albert and the Words" - Innocent and Sin. His next article on Philosophy, entitled "Wisdom of the Wisdom", was compiled in 21 volumes. Abu Ali Sina was 21, and the day he was studying in the library, he realized the fire was part of the library. Many books burned in the fire, and Abu Ali Sina and the guards failed to shut down the fire. Later in the city, Abu Ali Sinai burned down the library. This stirred the ruling ruler and prevented Abu Ali Sina from entering the clinic and hospital. At the same time, Abu Ali's father died and he decided to leave the city. Stay at least one month at a break in the middle. Until then I met with Mansur ibn Iraq, the great scholar of the court of Khwarizm. And I invited Mansur ibn al-Iraq, Abu Ali Sina, to the court of Khwarizm. Khwarazm Shah Governor's Office was the town of Gorangay on the seafront of the Jihun River. After a while, the rest of the city met with Amir Ibn Mamoun Khwarazm Shah. Abu Ali Sina spent about 13 years in Gorgan, teaching, writing and treating patients. Over the years, he wrote books and books. One can mention a treatise on the pulse, written in Persian. Another treatise on depression called Hannah al-Baba and many other treatises. One day, Mahmood Ghaznavi sent a letter to Ibn Mamoun Khwarazm Shah, who should send all his scholars to the Ghaznavid capital.

Abu Ali Sina refused, and after 13 years of life in Gorgan, she escaped from the night. Sultan Mahmud, who was very upset by Abu Ali Sina, was ordered to award him a prize. Abu Ali Sina went to Hamadan in 394 to treat colic disease, where he was appointed to the Ministry after the treatment of Shams al-Dawla. In these years, Abu Ali Sina finished writing his book of law. In the fourth year of his ministry, he set up a law to reduce the army's ration, which led the troops to rebel. After a while, she became ill and died when she died. After that, Abu Ali Sina decided to go to Isfahan and Sama al-Dawlah, the successor to Shams al-Dawla, was arrested and imprisoned for treason because of treason. In the year 402, following the attack of Alaa al-Dawlah on Hamedan, Abu Ali Sina was pardoned. During the years of being imprisoned, he wrote several books. Abu Ali Sina died in 415 year due to illness in the city of Hamedan. His tomb is in the city of Hamedan.

The works of Abu Ali Sinai are generally written in Arabic. Later some of these works were translated into Persian. Abu Ali Sina was highly skilled in Persian language and wrote over 20 works in Farsi. Among his Persian works, the Alaa Encyclopedia and the pulpit can be mentioned. There is a list of Abu Ali Sinai's works, either attributed to him or his works. This list contains 111 related articles and 131 original writings by Abu Ali Sina.

Book Abu Ali Sinai's Law is a medical dictionary. This book has all the basics of medicine. The book was used by physicians at the universities of Europe and America two centuries ago. Translated into most of the world's living languages.

Abul Hasan Behmnir Bin Marzban: Abul Hasan is one of the most famous students of Abu Ali Sina. He was a Zoroastrian in Azerbaijan.

Abu Abdullah Mohammed bin Ahmad al-Mousumi: Another famous student of Avicenna, and wrote the treatise on love, Abu Ali Sina in his name.

Sheikh Ali Nasani Khorasani: Nasser Khosrow has mentioned in his travel report about him as a student of Abu Ali Sinai.

Abu Mansour Hussein Bin Taher Bin Zilla Esfahani: Another student of Abu Ali Sina Abu Mansour Isfahani. He lived in the fourth and fifth centuries and has had many skills in mathematics. He died in 440 AH.